The fantasy genre is full of groups: mercenaries, thieves, assassins, adventurers and the like. Whether they are going on heists or epic quests to save their world, there is usually a cast of characters that have set out with the same goal. While larger groups are always fun to read about, especially if they all have their own point of views, there is just something so fun and intimate when it’s just two characters on a quest.You get to know them better and really care for them on a deep level.

Today I really wanted to bring attention to my favorite literary duos, from well known and loved to lesser known, but still just as fantastic as their well known counterparts.

If it weren’t for Sam, Frodo would never had made it to Mordor to destroy the ring. Sam is the true hero of the series for keeping the quest going, because, well, to be perfectly honest I’m not the biggest fan of Frodo. They balance each other out, and where it first appears that Sam needs Frodo, you end up realizing that Frodo is the one who needs Sam. I do wish that Frodo was able to handle things on his own, but that would mean that this fantastic duo wouldn’t exist.

How could I mention Frodo and Sam without mentioning Merry and Pippin, my two favorite hobbits? They get into so much mischief but they still look out for each other and have each other’s backs when it really matters. They are (almost) always together (fool of a Took!); where you see one, you see the other. Plus, movie Merry and Pippin have some really great comedic scenes that are only shown in the extended edition. I think that they are probably my favorites out of all of the hobbits. 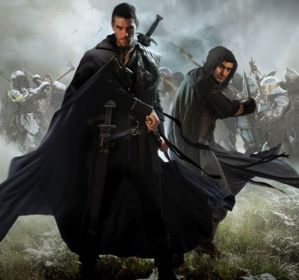 This mercenary/thief duo is so interesting! I just recently finished Theft of Swords, and they have such great chemistry together and know instinctively what the other will do before they do it. They are both so sarcastic and witty, and you can tell that they have a long history together. I’m excited to see where their path leads and to see how they met in the first place! At the end of Theft of Swords we get some nice reveals into where they came from and who they are individually, but I don’t think they would be were they are without each other. 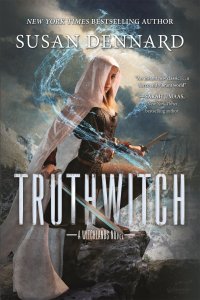 Iseult is a Threadwitch who saves the life of Safiya, who is a rare Truthwitch. This duo has each others backs through everything, even while they are on the run from those who would control Safiya to gain access to her powers. They would willingly die for each other and do anything to keep the other from harm. Of course, that doesn’t stop them from getting into all sorts of trouble, including being hunted by a Bloodwitch. I love how sisterly their bond is and they really care for each other. 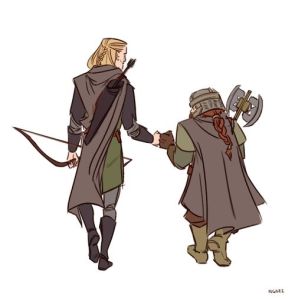 I swear I’m not trying to make this a LOTR themed post, there are just so many wonderful duos in that series, okay? Out of all of the duos I’ve ever read about, Legolas and Gimli are hands down my favorite. As I haven’t gotten to read the books yet (I know, I’m a horrible LOTR fan), I’m basing everything off of the movie versions of these characters. Their interactions and how they go from reluctant partners to best friends is so fantastic and I love the contests they have with each other to see who can kill more enemies than the other.

These brothers from another mother are so protective of each other and always have each others backs. I don’t think the pair gets as much attention as each of them with their respective love interests, but the two together are so sweet and endearing. If you haven’t read A Darker Shade of Magic by V.E. Schwab, I really think you should do so just for the sheer brotherly love these two have for each other. 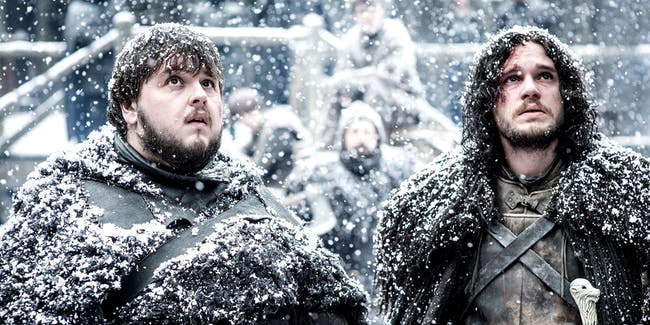 I love the interactions between Jon Snow and Samwell Tarly! They really balance each other out, with Jon being the muscle and Sam being the brains. If only they spent more of the books (and show!) together, I can only imagine the things they would get up to. Between the two of them, they could probably save all of Westeros and I am really hoping they both survive what’s to come so that they can show us more of their awesomeness. 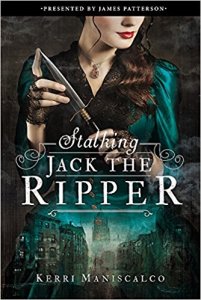 Not only are these two great friends, but their romantic chemistry is one of the best that I have ever read! Their banter is so witty and playful, and even though they are in a time period where it is inappropriate for a young lady to be alone with a young man, they still manage to make us fall in love with the two of them together. The suspense that is felt is just so amazing, and it transfers over into their life of solving crime and autopsies. If you’ve been on the fence about reading the Stalking Jack the Ripper series, I think that this pair alone is a great reason to pick it up!

I still have many many more books to read that have dynamic duos in them, so hopefully I’ll be able to add on to this list soon! Let me know if you have any really great duos that you love, and I’ll be sure to check them out! Thank you all for reading and I’ll talk to you in the comments!