Sorry for posting two reviews back to back, but today I wanted to share my review for Descendant of the Crane by Joan He! I was really excited to read this book and it was so hard to find because it was sold out everywhere! 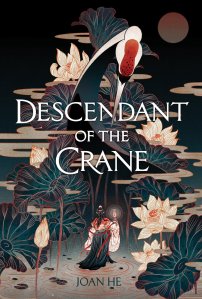 Tyrants cut out hearts. Rulers sacrifice their own.

Princess Hesina of Yan has always been eager to shirk the responsibilities of the crown, but when her beloved father is murdered, she’s thrust into power, suddenly the queen of an unstable kingdom. Determined to find her father’s killer, Hesina does something desperate: she engages the aid of a soothsayer—a treasonous act, punishable by death… because in Yan, magic was outlawed centuries ago.

Using the information illicitly provided by the sooth, and uncertain if she can trust even her family, Hesina turns to Akira—a brilliant investigator who’s also a convicted criminal with secrets of his own. With the future of her kingdom at stake, can Hesina find justice for her father? Or will the cost be too high?

In this shimmering Chinese-inspired fantasy, debut author Joan He introduces a determined and vulnerable young heroine struggling to do right in a world brimming with deception.

I went into this book thinking it would be more fantasy based, but it’s really more of a mystery set in a fantasy world with some fantasy elements thrown in. I don’t think that is a bad thing, it just wasn’t what I was expecting it to be.

Once I got it through my head that it wouldn’t be heavily fantasy based, I really ended up enjoying this! I did have a few questions relating to the magical aspects of the book because they didn’t quite make sense to me, and it looks like this may be a standalone (at least, there isn’t anything listed on this book’s Goodreads page). Going into those questions I have would give things away, so I don’t want to mention them here but just know that I’m quite confused when it comes to the sooths and Hesina’s father.

I loved Hesina and her desire to do what she thought was right and get justice for her father. I also loved that her opinions changed when she was met with evidence that showed her that her view was wrong. She admitted she was wrong and tried to correct her thinking, which is very admirable. She didn’t always make the right decisions, but she gave everything her best shot. When she realized that the sooths aren’t as evil as everyone said they were, she made a point to try to bring equality to her kingdom.

I also really liked the emphasis on familial relationships instead of romantic ones. Hesina has a brother named Sanjing that she used to be very close with until they got older, not they have a fairly strained relationship. Hesina also has two adopted siblings Caiyan and Lilian, and her relationship with the two of them was much more loving than the relationship she has with her brother. She also has a half brother that she doesn’t really think much of.

The political maneuverings were really interesting and the idea of these eleven men and women who brought peace to this country centuries ago was also something that I found intriguing, but I wanted more explanation on them. But then again, I do really like details when it comes to things like that.

This is being called the Chinese version of Game of Thrones, and while I can see where that comparison comes into play, I don’t necessarily agree with it.

Have you read Descendant of the Crane? What were your thoughts?

14 thoughts on “Descendant of the Crane | REVIEW”