I don’t want to call this list the worst books of 2019 because none of these books were bad, they just either weren’t for me or they weren’t what I was expecting them to be. So I’m just going to call this my most disappointing reads of 2019. I also didn’t have enough to make this a full list of 10, which is a good thing for my reading of 2019! I will be including some spoilers for some of these books, because some things that occurred in these books are some reasons why I didn’t like them.

In An Absent Dream 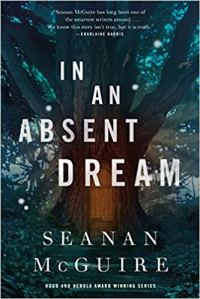 I was honestly really disappointed with this book. I loved the first three books in this series, but there was just something about this book that made it not as enjoyable as the rest of the series! I’m not sure if it was the character of Lundy or the setting, but something just didn’t click with me on this one. I’m thinking that it had something to do with a combination of the two, since I find the worlds that are “logic” based worlds to be harder to understand and really connect with. I also wished that we had gotten more of the adventures Lundy went on in her portal world rather than just hearing about it as an aside. SPOILER: I mean, one of her best friends we never even met, so when they died I didn’t feel any sort of sadness for Lundy! It also never had any consequences for either Lundy or the world in general, it was more of a “my friend died and I’m a little sad, but oh well” kind of thing. I definitely seem to be in the minority on this though, but I’m hoping that the next book I’ll love since we are following some characters from previous books again that I loved! 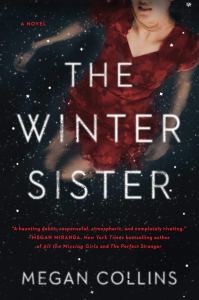 To be completely honest, I couldn’t even tell you what this book was truly about (I needed to look back at my review to even remember anything that happened). It’s a pretty generic domestic thriller where the main character has to come back to her hometown that she hasn’t been to in years and starts to look into the disappearance of a family member. The twists weren’t all that surprising, and the characters were hard to connect with. I’m usually one of those people that as long as the final twist shocks me, I’ll give the book a fairly good rating, and this was definitely not that. The way we found out who was behind everything was far too convenient and there wasn’t really any build up to that moment, it was just kind of spat out at you. I hated the main character, and even though she was meant to be unlikeable and unreliable, in my opinion it wasn’t done very well. We could start a page with her so convinced that one person was behind the disappearance and murder, but then by the end of the page she would be screaming accusations at a completely different character! Then another, then another, then….well, I think you get the point. I was getting whiplash from her back and forth! This was a debut though so I’m hoping that the next books this author writes improve on this because I definitely think that future books would be pretty good! 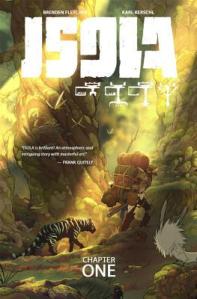 This was the year that I tried graphic novels for the first time, and while I had some hits (Saga!), I also had some misses. I was really hoping that Isola would be another hit for me, but unfortunately it wasn’t. This graphic novel follows a queen who was put under an evil spell that turned her into a tiger who is travelling to the land of Isola with her captain of the guard to reverse the spell. Unfortunately for me, the storyline was too hard for me to follow and I had no idea what was happening half the time! The reason I like Saga so much is that you still get explanation of the world, the characters, and how everything intertwines. I didn’t feel like I was getting any explanation of anything in this one though, just a tiger and a soldier walking through the forest with creatures and people who just kind of show up and disappear without really showing you who they were. My disappointment in this really comes down to how confused I was while reading this. The art was beautiful though and it seems like it will have a F/F relationship (or at least it hints at one) so if you think it sounds interesting I would still check it out, just know that it isn’t as well explained as some other graphic novels. 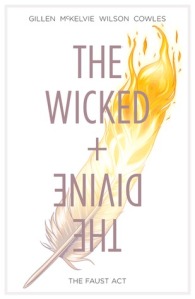 I’m definitely still trying to find the graphic novels that I enjoy, and I think I’ve found one thing that I really need: lots of explanation. With this graphic novel, you’re kind of thrust into the middle of the action with little explanation as to what is really going on. I hate to continue to bring Saga up, but it’s the only graphic novel that I’ve read that I truly loved from beginning to end. I love that Saga shows you the backstory of the characters to add to your understanding of what is going on and to help you connect with those characters, and it’s also clear when it IS doing a flashback. With The Wicked + The Divine, there wasn’t really a ton of background other than what you get in the synopsis. There were so many questions that I had that weren’t answered, and unfortunately I didn’t like this first installment enough to pick up the second one to find out (graphic novels are expensive!) There was a ton of diversity when it comes to the characters, but that couldn’t save this for me. Again though, the artwork was absolutely STUNNING but it wasn’t enough for me to continue on. 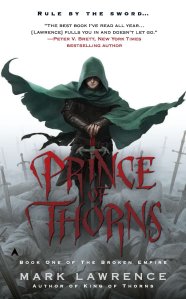 I’m always a sucker for a good fight for the throne, and with Jorg trying to win the throne and get his revenge all at the same time you would think that this would’ve been perfect for me! And while I enjoyed certain aspects, it was overall just really hard for me to follow along with when it came to what was happening and why it mattered. It was also difficult to believe that Jorg was only 13 or so based on his actions and the decisions he made. It was also pretty unbelievable how “godlike” he was with his strength and abilities. I mean, he’s better at swordplay than people twice his age, and smarter too. I know that he isn’t meant to be a likeable character (in fact, completely the opposite since this is a grimdark fantasy book) and that was perfectly okay, I just struggled connecting his actions to his age at this point in the story. I know that the following two books follow him as he gets older, so I’m thinking this particular complaint will go away as the series progresses. I also didn’t feel like I got a good sense of the world, it seems like it may be an alternate version of our own world (Plato, Rome, and India are all mentioned multiple times) but it wasn’t ever mentioned what happened to get the world to this point. This was Mark Lawrence’s debut series though, and I’m not giving up on reading this series or any other books by him because I know how much everyone loves them! 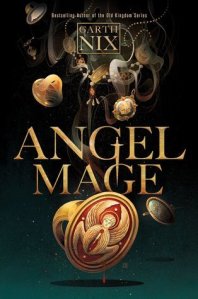 I went back and forth about adding this book to this list, but ultimately it was disappointing to me so I’m adding it. The first 80% really dragged and I think the book could’ve benefitted from taking out 100 (or 200) pages, because there was not a lot happening and the pacing was pretty slow, and it felt like what was happening in that section of the book was insignificant in the long run. The major events take place in that last 20% and was probably the most interesting of the book for me. The characters weren’t really fleshed out other than Dorotea and I was constantly becoming frustrated with the actions the characters took. I realize that this could be how The Three Musketeers was (as this is a reimagining of that story) but it just rubbed me the wrong way at times. I’m wondering if I would like this book more if I had read The Three Musketeers first to see the inspiration for the story and the characters, but I also feel like you shouldn’t need to be familiar with the source material to enjoy a retelling. I did like the magic system, but I also was confused a good portion of the time with how everything worked and the rankings of the angels. I was lucky enough to be sent a copy of this book to review from the publisher which I am so grateful for, and I definitely plan on continuing with the Abhorsen series that is also written by this author, but this book wasn’t my favorite.

What were some of your disappointing reads of 2019? Did you love any of these books? I would love to chat about them!